Each year, the annual Global Cold Chain Forum brings out a host of new product and service offerings, and this year’s meeting (Boston, Oct. 5-9) was no exception. But while the new offerings were prominently on display, a noticeable number of what might be called refinements could also be seen. Consider:

More than a few attendees at the meeting noted that the proliferation of vendors for temperature-controlled life sciences logistics is itself becoming a problem: more choices mean more complexity in selecting options. On the other hand, the continuing innovation makes for a more efficient logistics service. 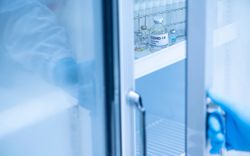